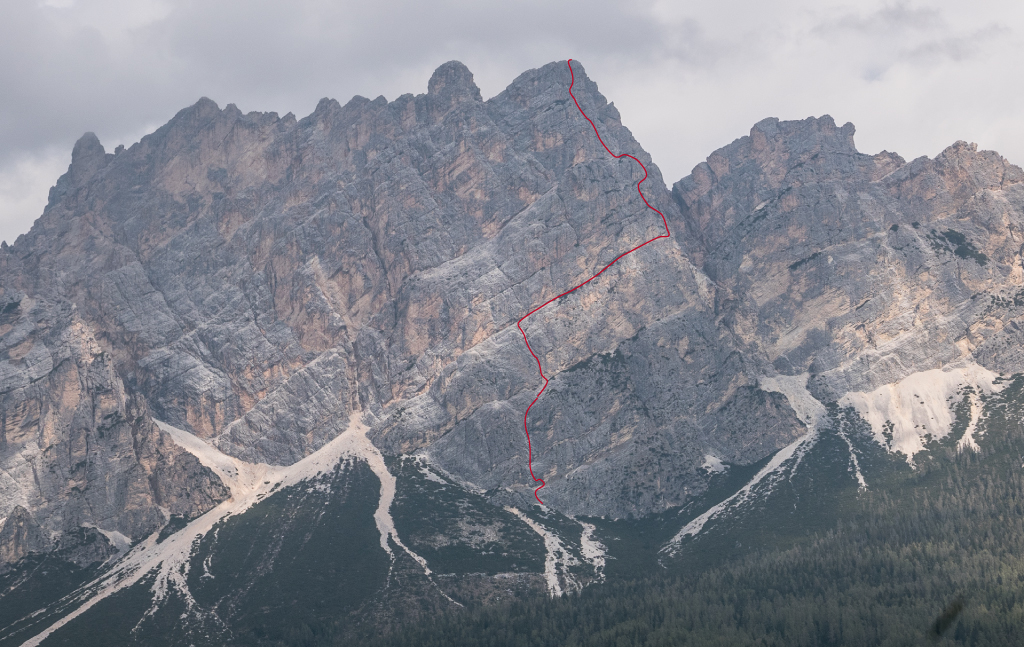 Pomagagnon is one of the mountain range which makes the panorama of Cortina d’Ampezzo so beautiful and famous. It is that jaggered yellow and grey wall you can see while walking around downtown in Cortina, the first mountain standing in front of your car window while you’re getting out of the road tunnel in Pocol as you drive down from Falzarego Pass, Pomagagnon is also the one you stare at when you get to Cortina from San Vito di Cadore, the one which gets red with the alpenglow as the sun sets. On the Pomagagnon mountain range, starting from the far left, we find Punta Fiames, a very nice pointy peak popular for its classic climbing routes and the Strobel via ferrata, and beyond Pomagagnon scree there’s a  characteristic wall (Punta della Croce, Testa del Bartoldo and Croda del Bartoldo are the main summits) cut in 5 steep and narrow ledges, called “Cenge” in Italian. One in particular, the Third Cengia, is the most spectacular “rocky hike” of Cortina d’Ampezzo and one of the most beautiful in the Dolomites. 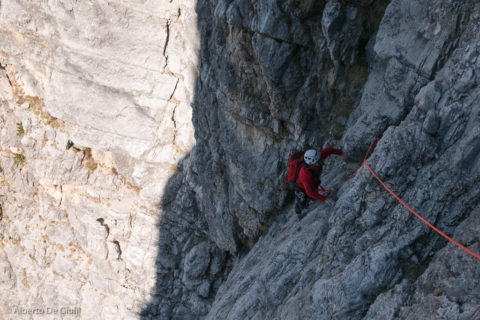 There are several climbing routes leading to the top of Pomagagnon, and the first ascent was made back in 1899 by the local mountain guide Antonio Dimai along with his British clients, Phillimore and Raynor, fellows of many other climbing journeys and first ascents around the Dolomites. Their climbing route is not very hard as it’s graded 4/4+ on the most technical pitches, and it goes up in the middle of the South Wall till the Third Cengia, then it follows mainly the South – East ridge of Costa del Bartoldo all the way to the top. The climb is typical of the late nineteenth century, as it follows a system of cracks, chymneys and diedhrals with some fine steeper face climb sections for 18 pitches if you start from the bottom of the face. Most of the climbers approach to this route only from the Third Cengia in order to climb the upper part only, where you find the famous “Phillimore step” right at the first pitch, a short traverse to the left on a rock slab with little hand and foot holds.  Couple of days ago we climbed this route without cheating, starting from the bottom, and I must say that even the first pitches are very interesting to climb, with some exposed traverses where you need to “read” well the rock to understand how to get across (the rock is solid but you need to be careful as the route is not climbed often ). An old wood piece coated on aluminum (it belongs to the old cross on the top of the Bartold’s Coast placed back in 1950) together with an old piton stick into a crack 2 meters higher above the cable of Third Cengia, they mark the start ofr the Phillimore route for the upper part. The climb along the pitches is never strenuous, there are few section where you need to go through some steep grass pockets and bushes but you’ll find some nice moves on every pitch. 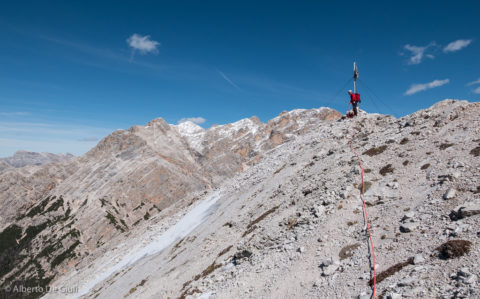 On top of  Costa del Bartoldo after climbing the Phillimore route.

The panorama you will enjoy from the top of Costa del Bartoldo is just phenomenal, as you will stand probably alone on one of the most beautiful summits around Cortina d’Ampezzo, as the way to the top even from the normal route is long and strenuous up on a very steep rock slabs covered on thin gravel. If you’re up to climb the Phillimore route in the beginning of the season as we did, it is better to take a pair of boot crampons in the backpack because the way down the easy route on the north side might be covered of hard snow.
I would recommend to climb the Phillimore route if you like old climbs that used to be classic route, also if you’re that kind of climber who wants to spend a beautiful and long journey  in the mountains, away from the classic crowded itineraries. 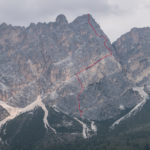 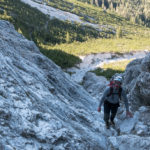 Approaching to the start of the Phillimore route on Costa del Bartoldo. 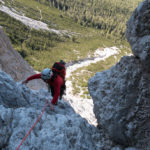 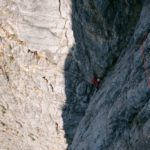 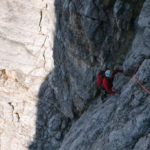 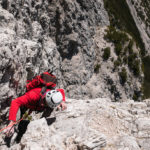 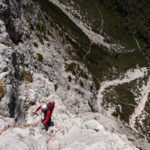 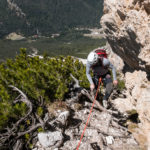 Hiking accross the Third Cengia of Pomagagnon to reach the second part of Phillimore route. 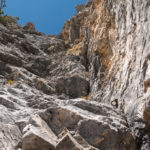 This piton marks the start of the upper part of Phillimore route on Costa del Bartoldo. Cortina d’Ampezzo. 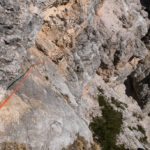 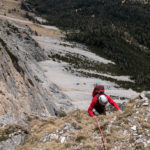 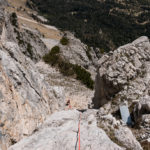 As long as you run into the old metal and wooden parts of the old cross of Costa del Bartoldo, you know you’re on the right route. 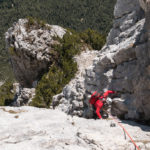 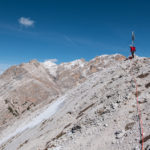 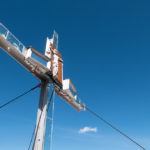 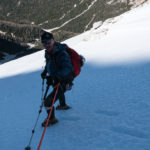 Hiking down the steep normal route down Costa del Bartoldo. 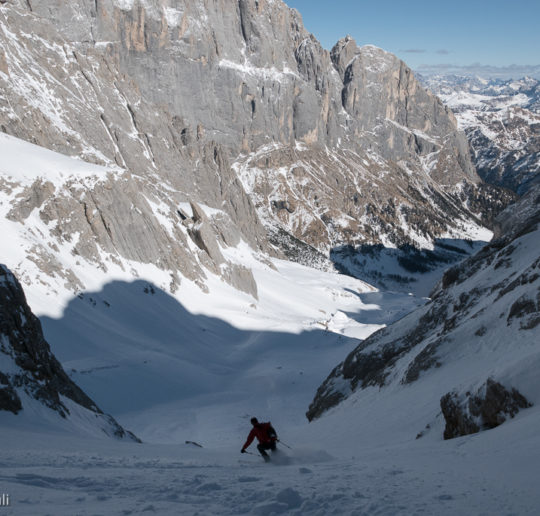 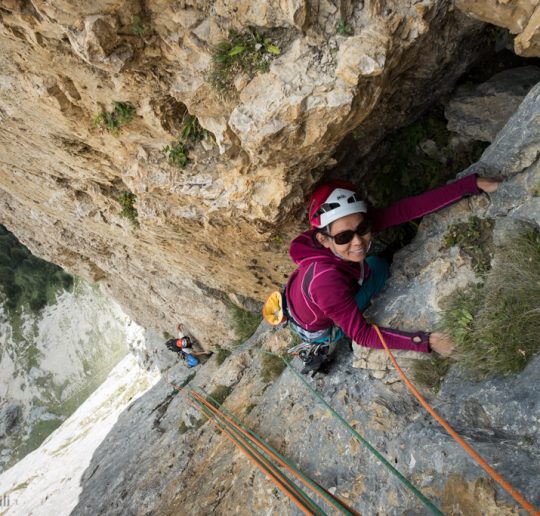 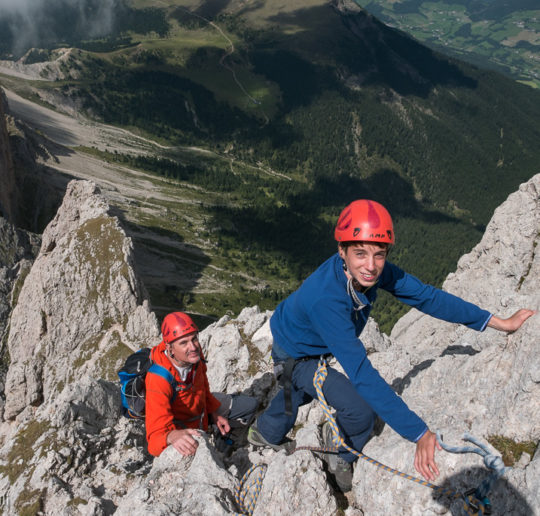