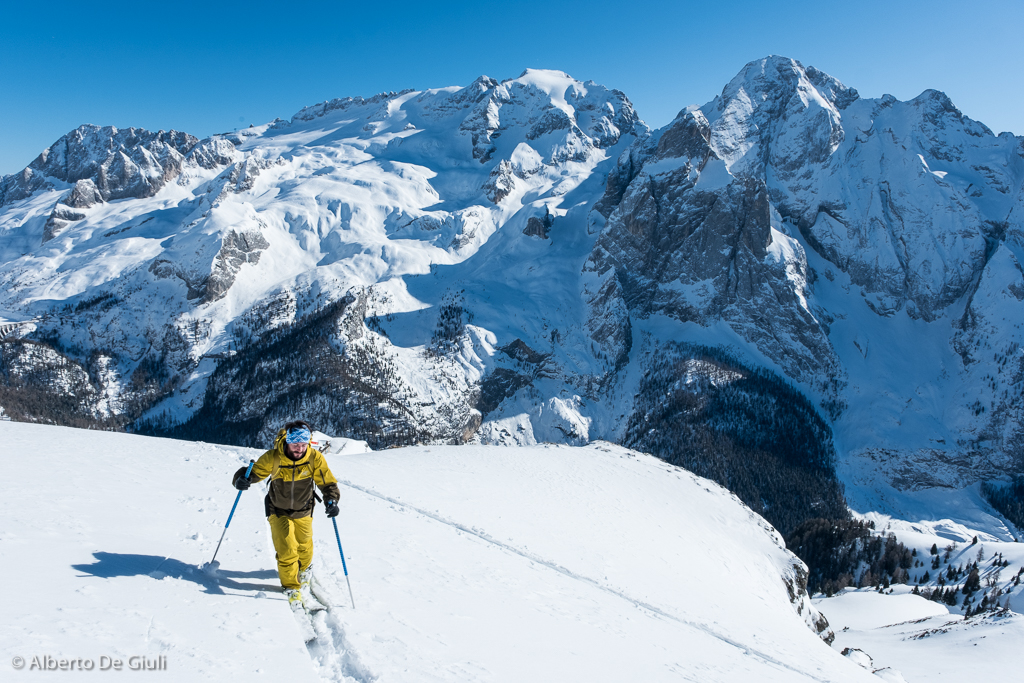 Finally I’m sitting in front of my laptop, I took “courage” and desire to write something about the most incredible winter skiing season I have ever experienced. It was really incredible in all ways. Started with the most perfect snowbase we have ever seen in recent years, excited to the top because the guiding and ski season was gonna be guaranteed. Then the wind hit the Dolomites on December 8 and slowly began to work on the slopes. While I was guiding guests on the ski slopes between Christmas and New Year I watched the wind scraping the snow off the highest peaks,and along all the valleys destroying every slope day after day. New Year opened the doors to the sunniest and most windy winter ever, and the first weeks of off-piste skiing were all focused on the sunny slopes, where the spring snow delivered us a few smiles on our faces while ski some steeper terrain. It was all about trouble skiing on the easy/flat, the shady exposures were only for the more experienced, steep skiing was becoming dangerous for everyone due to the uber rock hard snow.

A beautiful cappercaillie not far from the road, after skiing down Forcella Sassolung, Dolomites. January 2020.

Towards the end of January, when the situation was starting to get difficult in terms of snow quality, the first of the best weeks of my season turned in, thanks to a combination of acknowledge, great choices and perfect timing. I guided a couple friends from the US who would follow me everywhere, on a shorter and different version of my Dolomites ski traverse, from Alta Badia to Cortina d’Ampezzo via the Odle, Sassolungo, Sella, Lagazuoi and Tofane, with perfect weather and top notch skiing. 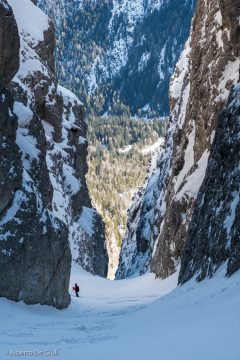 In February, a couple of tiny snowfall (the “leftovers” for us Southern when it snow big time in the North) in the right places made miracles between Cortina and Alta Badia, so we gambled and went for the Valscura del Sassongher in excellent condition before a proper big steep day in the Dolomiti di Sesto, where we skied the mighty Canale Omicida down Monte Popera: 1600mt skinning uphill!

Then it was about time to leave for the Caucasus,Russia, with the first rumors in Europe about the Great Fucker of 2020: the Covid-19. But let’s keep talking about skiing, and in Arkhyz I finally skied powder for 5 days with my BAM adventurers. It’s been a weird winter everywhere in Europe with low precipitation, but when you have a Eurocopter B3 only for you and huge alpine terrain, you only have to fly and chase the good in the right spots. & Nbsp; I’m gonna talk about heliskiing in Russia (Arkhyz and Kamchatka) on one of my next posts, just wait a bit.
I returned to Italy with the first signs of the Coronavirus, some fully dressed and masked people measured my temperature once back to Marco Polo Airport just before midnight. 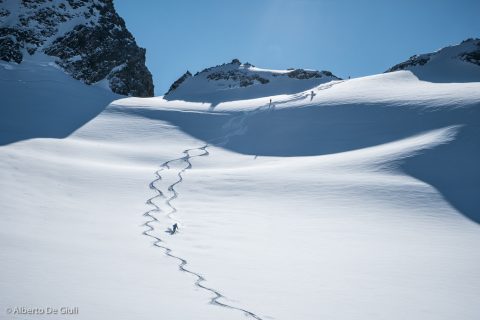 I found strange that it didn’t have temperature after an endless journey which ended to Hotel Regina in San Martino di Castrozza at 2am. The first and only ski traverse of the Dolomites from San Martino to Tre Cime di Lavaredo Peaks kicked off the following morning. The sun, two great companions like Rich and his daughter Lauren, the beautiful journeys on skis, that was definitely another best week of the season, still on the same snow from November, because those little new flakes we had,they all blew away with the wind. 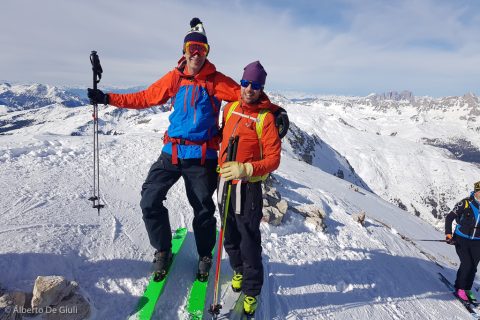 On top of Monte Mulaz with Rich, day1 of our Dolomites ski traverse from San Martino di Castrozza to Tre Cime di Lavaredo

Right at the end of February I had one of the worst ski weeks ever, in terms of snow and weather conditions, changes of plans and difficult choices were on the agenda, but we still found some good tours to do. The weather forecast finally was giving us hopes for some fresh snow right at the beginning of March, but the first things to fall down to me were the cancellations due to the Coronavirus epidemia. The first week I got canceled was right the upcoming snowy week, honestly I was almost relieved because snow shoeing was on the agenda, and the new snow forecasted for Monday 2nd and Tuesday 3rd of March (a date we cannot forget)really happened, and snowed big time.

While it was finally dumping, the cases of Coronavirus in Italy began to grow dramatically, and the first rumors from underground were talking about lift closing at the end of the month, but the Superski Company would deny everything under the word “commitment to keep everything open until the end of the season “. But there was no time to waste on useless worries, because the sun and not the wind this time were expected on the days after the snowfall, which proved to be the most beautiful of the winter ski season for us in the Dolomites. We’re talking about only 5 days, but with an escalation of stoke and fun that I find hard to describe with words. Each day was better than the previous one, as much as the contages and deaths from Covid-19 in Italy. Exponential growth.

And Sunday 8 arrived, a P E R F E C T day in terms of snow quality, choice of descents, and as always adventure buddies. A beautiful day for me full of emotions, which was kinda having that taste of something coming to an end, which could have been called “the end of 2019-20 ski season” if we would have been in late April, certainly not on March 8th.

“Can’t get any better than this,” I kept telling myself as I was driving back home from Arabba. And in fact it went just like that, I haven’t worn my ski boots since the afternoon of the following day, Monday, when I managed to ski with my daughter Bianca on the empty slopes in the Tofana, before sinking definitively into this pandemic swamp called “Covid- 19”. First they closed the lifts, then the borders, then the Municipalities, and dulcis in fundo , they have locked us down inside the house. For God sake, better here in the mountains than in a friggin city, I’m not complaining. But it’s amazing how quickly our routine can change, my only thought until the day before was where to find the powder and a beautiful descent. Now I have to keep calm and breathe while I am the first grade teacher of my daughter…oh well, we must all think of being well in a difficult moment like the one we are experiencing.
In the next few days I will try to keep updated, focusing more on the goods of this winter ski season.
I want to thank my friends and clients for all the great time we have lived together on skis. It was nice, too bad it didn’t last long. 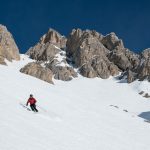 Off-piste skiing in the Dolomites. January 2020. 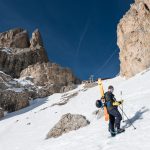 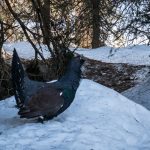 A beautiful cappercaillie on our way down from Forcella Sassolungo, Dolomites. February 2020 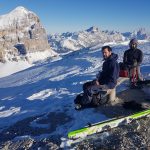 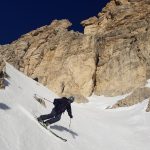 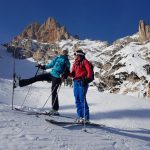 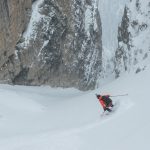 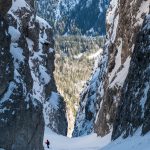 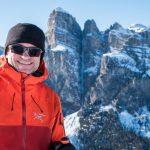 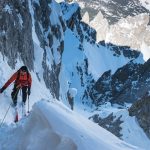 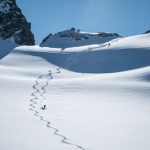 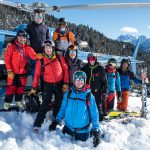 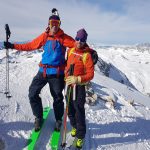 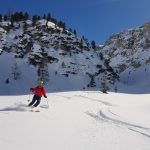 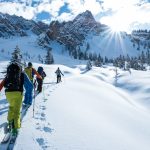 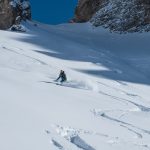 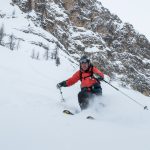 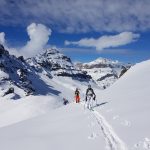 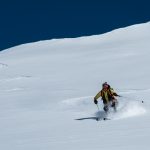 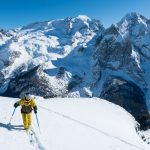 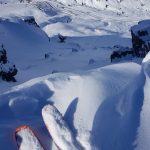 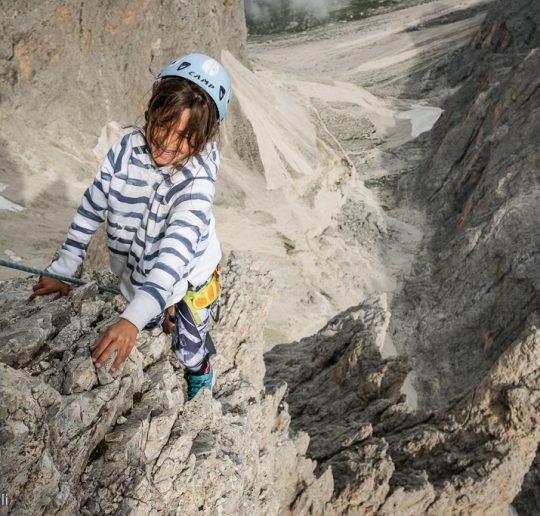 Climbing with kids in the Dolomites. Cinque Torri, the Thumb on Sassolungo and Torre Firenze, Val Gardena. 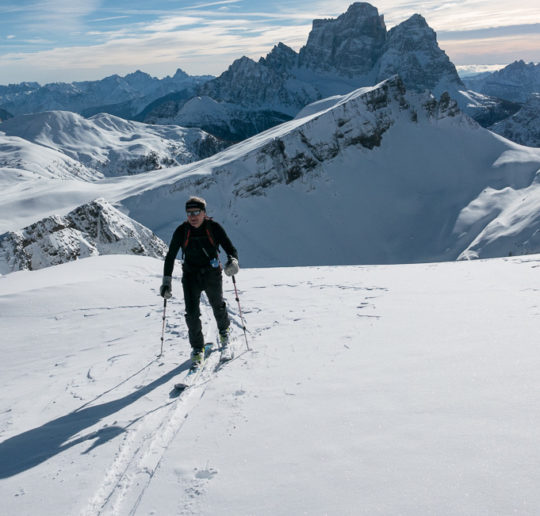